“What defines a beautiful pearl?”

Seibido Pearl has pursued the beauty of pearls across three generations ever since the founder, Kunihiro Isowa initially started the business. From the ancient times, people regarded pearls as gemstones and were moved by the beauty of pearls. We believe that delivering that beauty and enthusiasm is our mission as a pearl jeweler.

As a pearl jeweler that offers high quality pearls that are top 1% of the whole harvest, we look closely at each pearl, and perfect them using all necessary processes and materials. As a result, pearl jewellery created by Seibido Pearl does not only give the first impression of being “beautiful” but goes further by impressing the wearers.

There is not an easy answer for creating jewellery that can impress the wearers. This is the reason why every staff member of Seibido Pearl is always up for new changes, ideas, and challenges. Seibido Pearl never stops facing our customers. We create pearl jewellery infused with our philosophy and deliver them to our customers.

Even though there is no correct answer in jewellery making, we continue to answer the question “What defines a beautiful pearl?” using one definition:

“A pearl with many fine, translucent pearl nacre layers around it”

We hope you enjoy seeing and wearing Seibido pearl jewellery, and by doing so, we hope we can share with you our never changing philosophy, our passion for pearls, and our courage to take on new challenges.

“Pearls are pure and beautiful.”

from the idea that pearls are pure and beautiful.

(The kanji for 清美堂, 清 and 美, mean “purity” and “beauty” respectively.)

His philosophy does not only apply to pearls but also applies to the enterprise and employees.

Being “pure and beautiful” means being honest. 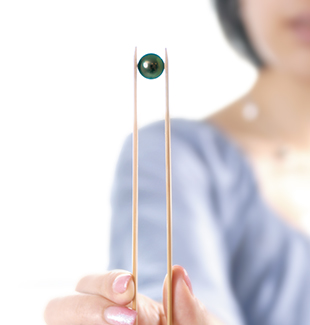 Without making any compromises,

From the pearl is harvested

Until it turns into a jewellery

Although a pearl never speaks its story,

as a trust-worthy pearl source for customers to return with trust in the future.

Seibido Pearl has been reminding ourselves where we stand, where we have been and where we are going from the philosophy written in the name of our business.

By the time beautiful pearls are harvested and delivered to us,

so much passion and wisdom filled drama also grew with them.

But the pearls never can speak

of their beautiful stories themselves.

We find the story of pearls,

and go even further to find the charm of the pearls

for our customers to understand.

We stated our mission as “Seibido Pearl’s Promise” and have been keeping the promise ever since. 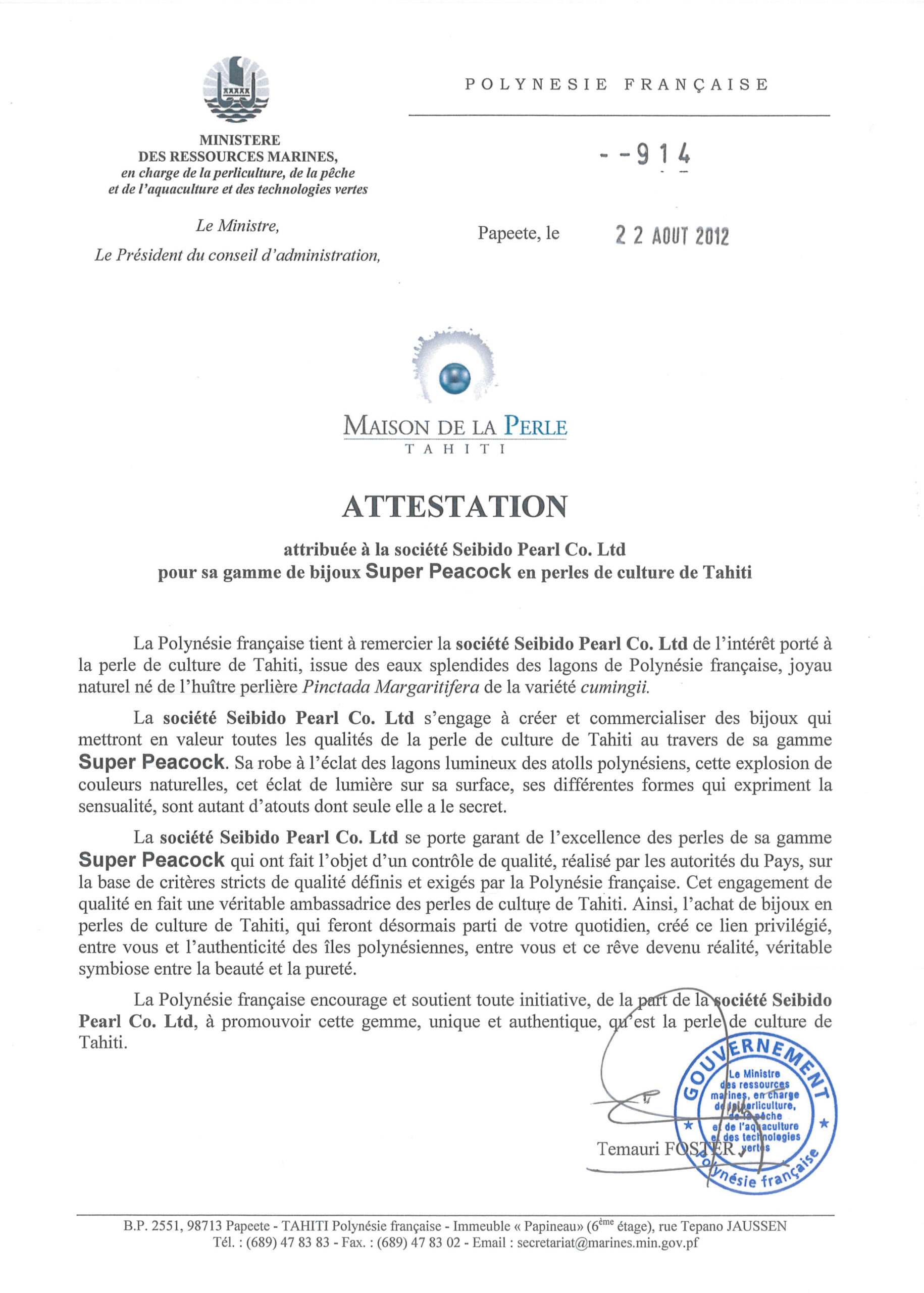 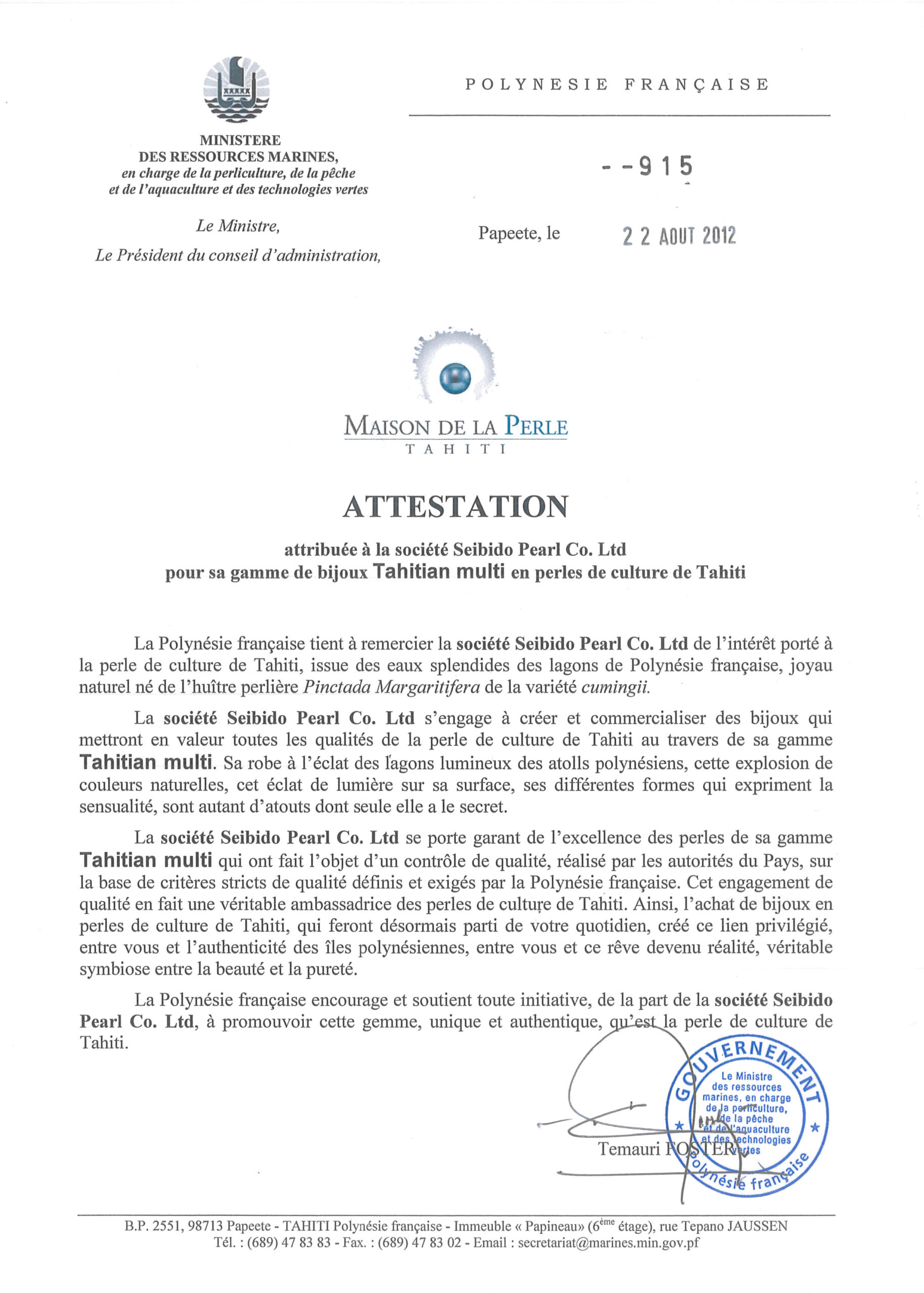 “Raiatea After the Rain” 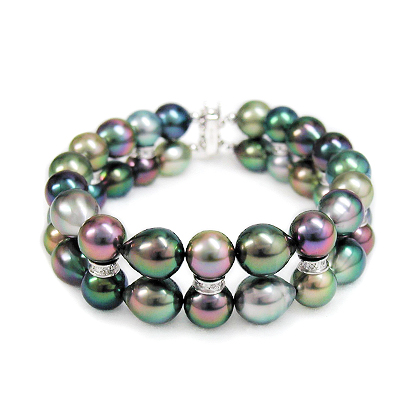 The inspiration for this bracelet came from the vivid flowers, after the rain intensified their colors with rain drops. This bracelet was made by taking advantage of beautiful shapes of pearls brought by nature, and by paying particular attention to pearl luster to recreate sunlight reflected on rain drops. 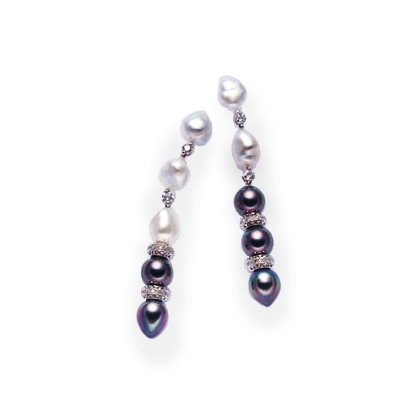 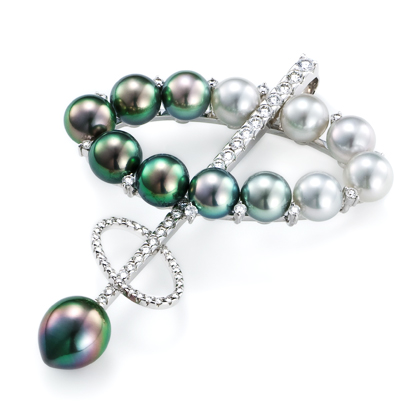 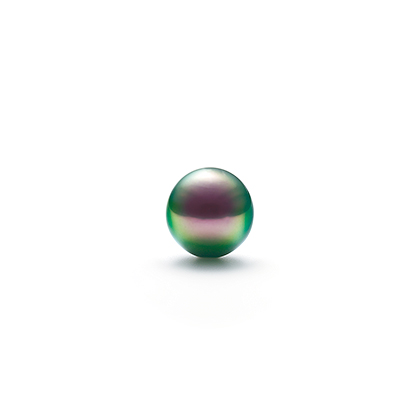 In 2011, to celebrate the 50th anniversary of the successful cultivation of pearls in Tahiti, the Tahitian government-sponsored contest for “the most beautiful Tahitian black lipped pearl of the year” was held. Poesia is the pearl that won this award. “Poesia”, which means “poetry” in Italian, is an oval pearl, 11.8mm in peacock color, with bright green, yellow and red interference color. After receiving an offer from the producer, the pearl became a collection of Seibido Pearl. 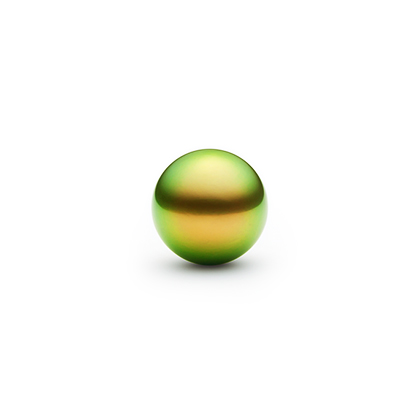 ―18mm black lipped pearl bearing the name of the birthplace of the President.

This miraculous pearl produced in 2013, has a rare natural pistachio color, very excellent nacre quality and a size exceeding 18 mm. Pearls exceeding 18 mm in size usually take over ten years to be formed and the culturing process must start inside of a young oyster.

The pearl was named “Mokoto”, after the name of the mountain that symbolizes Mangareva Island, the hometown of President Tahiti at the time. 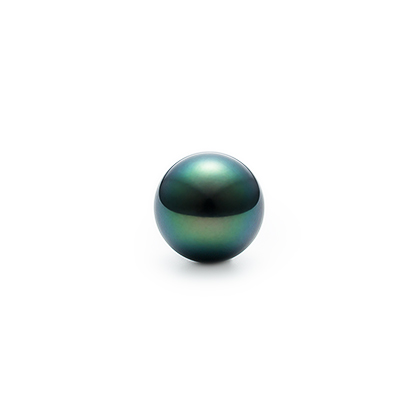 “TOKIAMA” is the name of a woman who is an apostle of God worshiped in Tahiti and is another name for Talave Island, located next to Mangareva Island. The chairman of the Mangareva Island Pearl Culture Association at the time saw this large pearl with beautiful deep blue hue and gave this name since the chairman believed that “beautiful pearl deserves a beautiful name.” This 2014 harvested black lipped pearl was also passed directly from the producer to Seibido Pearl and later was sold as a ring. 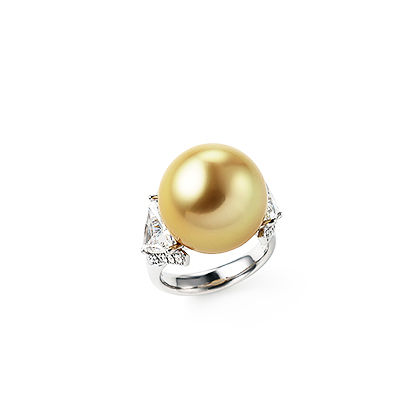 This round loose pearl was harvested in 2017, in Myanmar. Seibido Pearl has dealt with ten million pearls and this pearl is the largest, gem-quality golden-colored pearl we have ever seen. After successful negotiation between Seibido Pearl and the producer, the pearl became the collection of Seibido Pearl. The pearl was turned into jewellery after two years and the jewellery was featured on magazines.

Founded in Ise, Kumamoto Prefecture and start up pearl culture.